The StudioDEC crew is proud to have helped another great old house escape the wrecking ball. Another Nickel Brothers Moving job, this house ended up only a short distance down the street from where it had been built in Seattle’s Madison Valley. Surrounded by a city green belt, the Seattle Parks Dept. bought the house from Fred Noland and Susan Hansen in order to extend the green belt. Part of the sale agreement was that the Parks Dept. would try and find a buyer that would move the house to save it from becoming landfill. That buyer turned out to be Fred and Susan, along with friend Karl Stillner. They found a lot just blocks away and the move was on! Nickel Brothers Moving handled the logistics, and connected StudioDEC with the homeowners. We worked with them to design a basement for the moved house that could contain a mother-in-law unit (or ADU as the city calls them). The new site was a tight fit for the moved house, and steep slopes at the sides and rear of the lot made for a difficult design and permitting adventure, and of course a tough time excavating and building retaining walls.Associated Earth Sciences was brought it to provide geo-technical expertise to the project. Currently, the framing has been finished and the house is resting on it’s new concrete foundation. Follow the entire story here (with great photos) as told by the owners friend Ed Plikaytis. 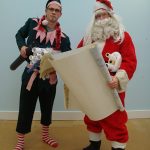